Oy to the VEY

It's been a week, let me tell you. Last Sunday - baby massage excellence, much sleepiness.

Sometime Wednesday night - Mama starts to feel achy...and her boobs hurt (although from hour-long nursing sessions that starts as soon as they've ended, there could be a reason) and then...FEVER. HIGH FEVER. And hard, red lumps on the right boobie. More achiness. As Bridget Jones said so eloquently: "fuuuuuuuuuuuuuuuuuuuuuuuuuuuuuuuuuuuuuuuuuuuuuck." Mastitis. Again. Insert mass amounts of ibuprofen.

Thursday- combine Monday, plus Tuesday, plus Wednesday night. Jealous yet?

Friday - even more of the same, but I'm out of 30 Rock. So I watch a trailer by Chris Rock called Good Hair* and the second disc of the first season of Mad Men.

Yesterday - more of the same, but with husband home there is someone to hold the Rabid Bunny while Mama runs some errands. But around that there was more sitting on the couch boobing my son and watching Mondovino**.

And today - as I am feeling better (but Rabid Bunny is STILL crankypants and overly tired), we had infant massage. An invention so awesomesauce it gets its own blog. Don't let me forget.

Sad realization, folks. That picture from Wednesday? It was taken last Sunday at baby massage. With my Phd. Let me refresh your memory so we can do a side by side comparison: 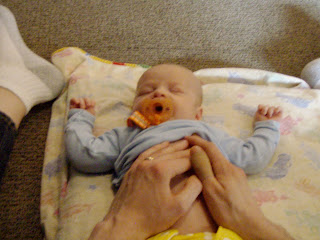 Yeah. So that was the old Olympus Stylus that has been so good to me.
And this is with my phone today. Same spot on the floor. More sun outside, but the same interior lighting. (no flash on either shot) 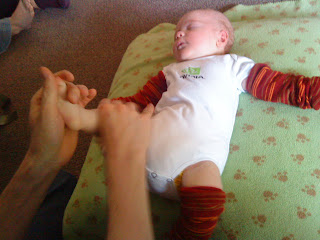 The picture quality is the same, if not better, on my freaking phone. I've been increasingly dissatisfied with the quality of my PhD. It's a 7.1megapixel Olypmus Stylus 770sw.

Don't get me wrong, I pink puffy heart this camera. It's been to 2 countries and on many, many other trips with me. It shoots 30 minutes of video, it goes in the pool, on the jet skis. I can drop it. I can give it to toddlers.

But it's had its day in the sun and mama is jonesing for a new toy. What's more, I've been saving my allowance (yes, we get allowances so we can by things we need but don't really need) so I can afford the new one. 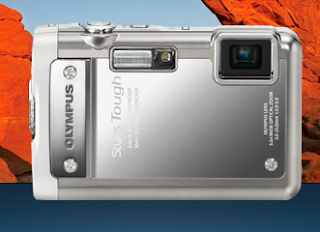 (source)
It does all of the above, but the bonus: HD video and 14 megapixels. It's in my amazon cart for pre-order.

It will do much more than I want or need it to do, but what it will do for me is be a diaper-bag camera of awesomeness that will take pictures I don't immediately need to photoshop into not sucking, and therefore keep all of the grandparents in a near-constant supply of pictures.

And maybe when things calm down around here I can get in some quality time with the Nikon film, because we miss each other.

Here's hoping everyone's Monday feels like the last day of school 30 seconds after the bell rings.