Many months ago, one of the blogs I follow (who even knows which one - there are well over 100 in my reader) linked to this wonderful blog, where she painted the foam floor tiles that are ubiquitous in houses with kids.

Her "After" is very involved. I'm not that ambitious.

Then there was another post on another blog...again a little ambitious for me...although we have also had the foam tiles in our kitchen. Whether they will return again completely depends on my floor-cleaning schedule.

So anyway, here's my before: (from June, but fairly accurate in terms of neatness and what the floor looked like)

Pretty bright, considering the part of the house they're in. I went to home depot and got some primer and paint.
After one coat of primer:

After a second coat of primer, two coats of paint and sealer.

A friend of mine, after the last house post, said "where the crap is your tv?!?" It's that hulking tube screen in the corner back there.
I think we'll like it. And that mantel back there, it's a work in progress. Don't worry: it should be done in time for me to decorate for Christmas....


And in case you were thinking that towel is just for splashes:

Happy Friday!
Posted by Emily at 16:48 No comments:

The one in which I recover the couch and hang something.

Our couch, while super comfy, has seen better days.

You've always wanted cats, haven't you? (this is really just the most obvious damage - everything from ice cream to milk to spit up has graced the couch...and many, many naps.)

It's a good couch (storehouse - structurally, it's in amazing shape.) So in an effort to discourage the sort of behavior our cats have been exhibiting - and to make spills easier to clean up (and maybe help with allergies) we cheaped out and bought a slipcover. I bought it off the surefit site, but it's made for target (it has the label) and it was on clearance. I haven't been very happy with Target's home line, so we'll see how it holds up. The brown pillow covers on the small pillows are from restoration hardware and they're super soft. I bought them a few years ago - not sure if they still make them. (I just checked. They don't. They're faux fur - like the best teddy bear ever.)
It's not a perfect solution, but it's growing on me. And it's not uncomfortable for lounging, which is a plus.

The thing which I hung is my take on the rain gutter/IKEA spice rack/sling bookshelves:

It is found at Home Depot for the bargain price of $8 and  wasn't entirely easy to hang (use hex bolts, drywall anchors, washers, and a socket wrench. A RATCHETING socket wrench....though why one would buy tools that don't ratchet it beyond me.)

It's hung at his height on the side of the room that's "his" and it houses library books. I think we'll enjoy it.
Posted by Emily at 19:35 2 comments:

Have I told you about Oohmoon?

Katie Moon is creating some of my favorite art - and for the first 24 hours of its online existence, it's free. Every week there's a new series, and I love every series more than the previous one.

When I've saved enough pennies (and feel like the time is right) we're going to commission a family portrait. Maybe a series.

Happy Arting!
Posted by Emily at 20:19 No comments:

I have a kid whose favorite thing ever (so far) are cars. And construction equipment. The bigger the digger, the better.

So a few months ago, we pulled out some of Husband's matchbox cars and Baz hasn't stopped playing with them since. 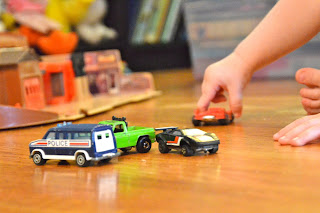 Well, of course he needs a road for them. And until we get the play table and the road set we've got on our wishlist, (and maybe even after) cardboard will have to do! 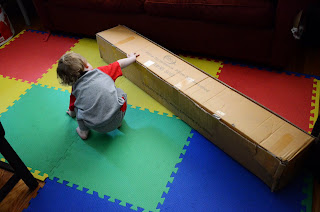 So I took the box our hammock came in... 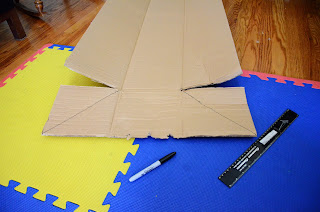 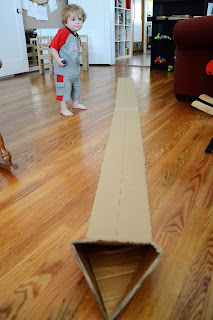 Folded and taped the end for the "Start"... 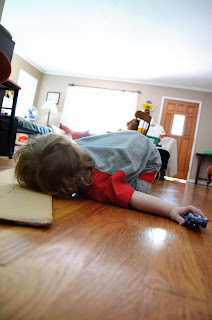 and then had to explain the concept to my child (who always lies down when I try and shoot from the floor...cute, but defeating my purposes.) 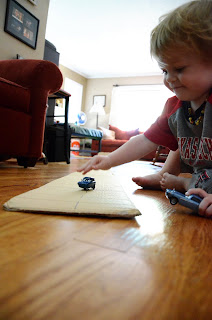 He figured it out. 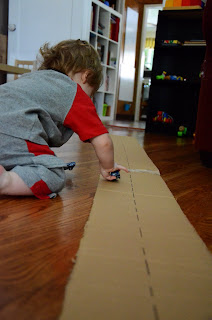 By the way - that 3-wheeled car is named Tomber*, from Cars2 (which we haven't seen.) It's Reliant Robin (or based on, whatever) and it may be the funniest car ever made. 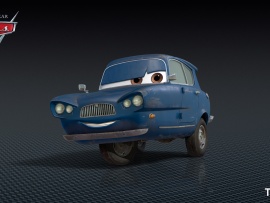 The One Where I Talk About My C-Section

You can find it HERE.

And you can find the entire birth slideshow, here:

And this is the little man yesterday: 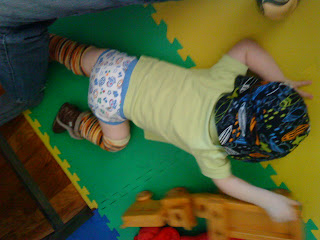 Happy Monday!
Posted by Emily at 13:25 No comments: