Sometimes all it takes is a little flip

I've been lamenting our small eating space for a while. Thinking that if we had room I would shift our mid-century heirloom table out into a proper dining space and bring in a cute mid-century diner table better proportioned to kitchen eating. Or put in a booth or something. The possibilities are endless.

Turns out, all I needed was to TURN THE TABLE.

I apologize for anyone who has had to maneuver around the table and blame it completely on the fact that it was moved into the kitchen last summer while I was knocked up, heavily drugged, and should have been in bed. It was moved by very nice men who put it where I said and then didn't touch it because you don't want to piss off the heavily drugged pregnant woman. Had I had my brain on correclty I would have said "can we turn it, please?" And everything would have been hunky dory and a year's worth of guests wouldn't have been so cramped.

Before pictures here. After pictures: 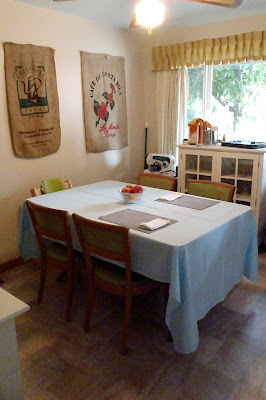 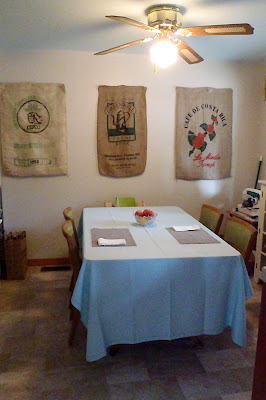 That's the Tripp Trapp Stokke back there against the wall. It's a trip hazard so it's out of the line of toes.

And yes, we use real linens at every meal. Don't you? (PS - for the record, when shopping for napkins or fabric with which to make you own napkins - only 100% cotton or linen will do. Synthetics just don't absorb as well, even synthetic blends. So when you're eating something really slimy (barbecue, anyone?) a not-cotton/linen piece of cloth will just smear it around. I like reddish toned napkins for barbecue. I could actually do a whole post just about napkins. I wish I were kidding.
Posted by Emily at 10:46