Baz - months ago - discovered that crayons will mark on *anything.* He demonstrated as much by coloring some of his wooden diggers. This morning, I got sick of looking at them all marked up and did some googling. The suggestions ranged from "tough luck" to "scrub them with baking soda" and a lot of references to a magic eraser (which I don't have.) But I do have regular erasers, and those work like a charm. Check it out: 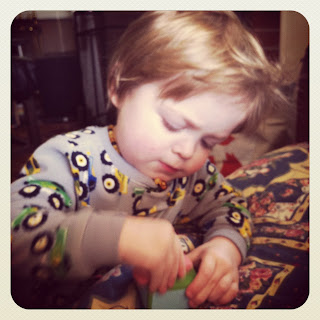 Yes, even Baz helped out. It's never to early to learn how to clean up your own messes.

The toys are these, and as you can see, the paint cleaned up much easier than the plain wood. But that's ok. It's leagues better than it was before. When we discovered that the toys had been colored on, we explained to Baz that they were now out of the toy rotation so that I could clean them. They lived on my desk while I tried the damp cloth trick (fail) and then after about a week I decided having a clean desk trumped clean toys and they went back on the shelf - I said nothing to Baz about returning them, but he noticed their presence and happily played with them. He has not colored on a single toy since, though, so the message must have gotten through. He was very excited to have them clean today. And I'm very excited that I found a *super* easy cleaning method!