Liveblogging an Experimental Day in 'Sposies

Tally:
Diapers in the landfill/days spent in environmental purgatory:15
Outfits changed due to diaper failure: 3


So a few weeks ago my sister, brother-in-law, and I took Bunny into San Francisco for the day. He was wearing a shell with a flip insert and there was badness on the train. By "badness" I mean I heard the tell-tale frat-boy sounds coming from his pants and then remarked to my sister "wow, this one really smells bad!"

Well, it turns out that the inserts weren't absorbent. This isn't me bagging on flip...except that I wasn't sad that we proceeded to use the rest up that day. Unfortunately, that meant that we were without diapers and were looking at an hour-long train ride home. With a baby who hates being wet and dirty.* So we stopped into Walgreens (CVS?) and picked up these: 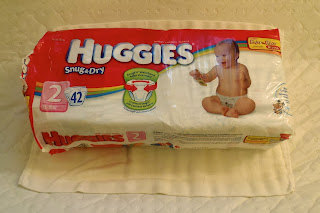 Yesterday I noticed that the CDs are having that lingering odor (specifically - the wetbag actually smelled when I was putting diapers into it) so it's time to strip. And since I had been putting off doing the load that was in the full wetbag, I decided that this weekend is the perfect time to use up all those 'sposies before he outgrows them and they truly go to waste.

Also, the argument I hear most frequently is how much easier 'sposies are than CDs. Specifically, that CD's are a "pain in the ass"  - all that laundry and extra work! So we're going to see if today is any "less" work than a normal day in CDs. (The fact that I'm stripping them today is not normal. In fact, it's only because we have wicked hard water and I was using not-cd detergent for too long that they need to be stripped this soon. Usually it's a need that arises less frequently than once a year, to my understanding.)

7:30am: We woke up and he went from his last clean GroBaby (nighttime diapers are usually double-stuffed fuzzibunz or BumGeniuses, but we were working with depleted resources) in a Huggies and daytime clothes. Still using cloth wipes, which might be the biggest PITA because it's a spray and then wipe situation. Diaper change otherwise is the same.

9am: new diaper, and he peed in the potty (we started EC this week, it's still catch and miss, but we keep offering and he keeps..um...performing.)

10:30am: new diaper and first clothing change of the day due to the #3. (Normally he's done so much drooling/spitting up that he gets a new outfit around lunch. Occasionally the edges of the cloth will become soaked and seep the the edges of his onesie - but that's happening less with the EC, and will continue to happen less as he grows into the one-size diapers.) 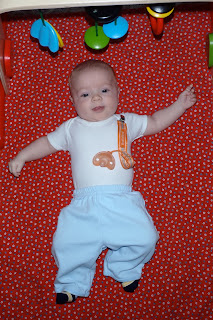 He's in pants because if he's going to #3 all day, I want it contained in his pants and not all over me, husband, or whatever he's sitting on.

11:45am: wakes up from power nap, eats. I wait too long after feeding him and his diaper it aready soaked so he just laughs at me when i put him on the potty. Literally. These diapers are certainly more trim then we're used to, but that's because you chose: chemicals or bulk.

1:45pm: another power nap, and before food he gets a pottytunity (success!) and a new diaper.

3:15pm: we've been outside gardening, so I bring Bunny in to check his diaper and have a pottytunity. Wet, wet. But we avoided a #3 because 1 + 2 went into the potty. these 'sposie results will be skewed. But I will say that his skin in the diaper area is an unfortunate shade of red. :-(

4:30pm: Husband changed him out of his wet diaper...it was uneventful. His skin is still red, though.

5:30pm: Singing in the rocking chair and there's that frat boy sound again. Decide it's late enough to have night-time routine (since it never ends with sleepytime anyway) so Husband cleans him up (full containment) and leaves him naked for the bath.  So far, aside from the redness, I'm not seeing much of a difference in the PITA category. If we were doing prefolds (or flatfolds) then this would be loads easier...but not with the pocket/AIOs.

I should add that we got Huggies - rather than another brand- because it was they had in his size.

By 2:00pm the Sunday - more diaper changes, one leaky LEAKY wet diaper (it wasn't even very saturated, it just leaked all over his outfit), a husband who declares that while Bunny's skin has stayed fairly dry, the poops are just ALL OVER and a pain to clean off of him. They were pretty decent overnight (we stretch those changes in favor of uninterrupted sleep. He got 3 when there probably should have been two, but I heard frat boy noises and went to the logical, but incorrect, conclusion.)

VERDICT: His skin reacted quickly and unpleasantly to the 'sposies, which is enough for me to switch to CDs. I can't even imagine what many consecutive days would do to his poor heiny. Granted - the results were skewed by the many EC Catches we managed. Also - I'm now spending a solid 2 weeks in Environmental Purgatory to make up for the eternal landfill waste that I added. I'd rather do a few extra loads of laundry a week than constantly be purchasing new diapers (which require water to make - so that's a wash) and it's also nice to know that Bunny's little brother or sister will be able to use these same diapers when the time comes. Cloth Diapers = free stash for consecutive kiddos...and if they're in good shape: resale. Word.

*Most days when I change a wet/dirty diaper I sing:


More lyrics to come because it giggles me. And if anyone knows where I can find just the background music, I'm totally making a video. It'll be a parody of a parody: