Baby Got Back (or: How Cloth Diapering is Working Out For Us) 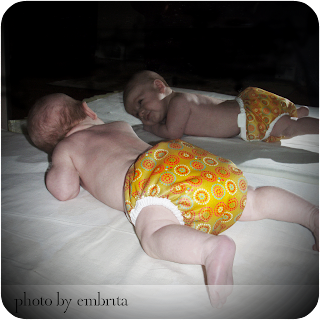 (Bunny in a bummi cover)
Since you asked. All of you. At least once, even if it wasn't always out loud.

In fact, once people found out that we were planning to cloth diaper from the start (and with the exception of in-hospital and a few days waiting for his umbilical cord to fall of - we did) that was more a topic of conversation than almost anything else (wait until we start talking schooling, people.)

A sample of remarks:

"Aren't you worried about sticking the baby in the belly with the diaper pin?"

"Where do I buy you rubber pants?"

"Good luck with that."

"It's worth clogging landfills for me to not have to deal with poop."

"I want/wanted to try that. But disposables are just so much easier."

So I'm not going to try to sell you on cloth diapers. Because, really. You're either on the bus, or you're off the bus. (I may try to convert you to EC when we get that going. But we're not there, yet.)

So. Here's how it's working out: it is awesome. 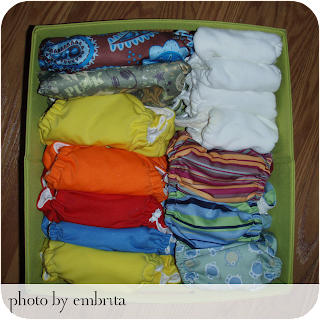 Part of our stash. The top two on the left are fitted all-in-ones that are too big for him, but which I picked up for a song. The solids are fuzzibunz (except the blue, that's a rogue bumgenius,) the patterns on the right are GroBaby and the inserts for the GroBaby are those 4 white folded pieces up there. Those two are my favorite so far. But Bunny is young. 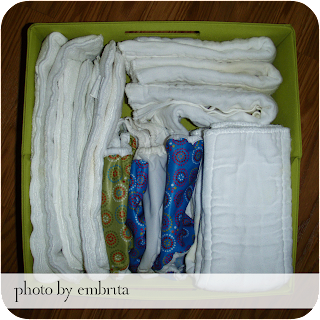 More (but still not all) of our stash - on the left are the inserts for the fuzzibunz and the patterns are bummi covers and then on the right are the pre-folds. I'm not sure we'll keep using the prefolds when he outgrows those covers. I'd rather stuff the diapers as they come out of the dryer or snap in new inserts than try to fold and hook a pre-fold onto a squirmy infant - especially once he's mobile and constantly on the brink of death. 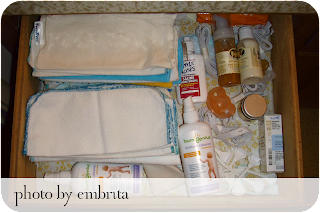 Our wipe/etc drawer. Wipes on the left, a couple of bottle of bumgenius spray, some nose spray, snappis for the prefolds, a gumdrop, and some Earth Mama Angel Baby products, and extra elastic for the fuzzibunz. (They have fabulous leg gussets so you can make sure the leg is tight enough - which is nice if you're child is long and skinny like ours.)
So here's how it works: Bunny lets us know he's wet/soiled in the usual way (and generally about 1 second after it's happened) and we head to the changing station in the bathroom*. We whip off the old diaper and drop it into the handy fuzzibunz bag that keeps all the yucky smells inside (we also have a bin liner and I'm not as big a fan. I'm thinking another fb bag is in our future because...) and has a handy zipper on the bottom: time for laundry, simply unzip, dump, and go. Then we pull open the drawer, pop out the spray and a wipe, spray his bum, wipe his bum, drop wipe into the same bag the diaper went into, and put on a new diaper. When we're out it's the same story, but with a smaller bag. And when I travel to Seattle in May I'll use flushable/compostable inserts.

The difference from disposable? I do more laundry (although as our stash grows and as his output slows down I'll do less and less - also there will be EC, but more on that later.) And his butt is cuter. Also - there's bulk, but that's the trade for not having chemicals against his skin. The other trades are a lack of diaper rash, and a noticeable lack of what they referred to in our parenting classes as "number 3."** (the exception to this happened when Bunny was about 2 weeks old. He'd been constipated all day, poor guy, and Husband had him settled on his lap, wiggling his legs and cooing and then there was poop leakage onto Husband's jeans...but I don't blame the diapers for that one. If you were laying on your back having your constipation worked out by having your legs waved around...there'd be a big mess, wouldn't there?)

If you google "cloth diapers" you'll find that the possibilities are endless. But that's what we use (the bummis, in all honesty, were given to us to test - but not because they read my fabulous blog. Because I begged them to pick me. But I haven't reported to them, so I won't report to you except to say that my Husband prefers that method so far. For the daytime at least.)

If you've got more questions, I'm happy to answer. But like I said - you're either on the bus or you're off the bus.


* I put it there for two reasons: first the countertop is the perfect height/size. Second - if all potty-related activity always takes place in the bathroom, then the bathroom is never a big mystical room in which to play. In theory, at least.