Because what's a New Year without a giant list of the ways in which you suck and can be better?

Reducing our consumption, waste, and clutter are one of the battles I feel like I'm constantly fighting.

To that end, I've made a list of the proper waste-recepticle and have hung it on the wall above our garbage area. It's a weird little spot by the back door...and it's GARBAGE - so there's no picture. Just think up something Martha Stewart would do, make it look slightly more neglected, and there you have it. 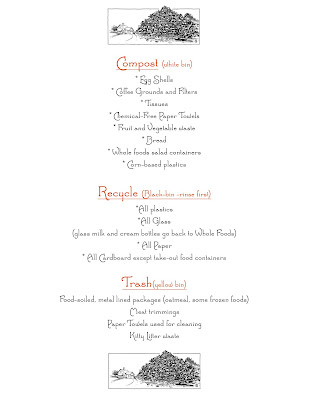 This is our crock: 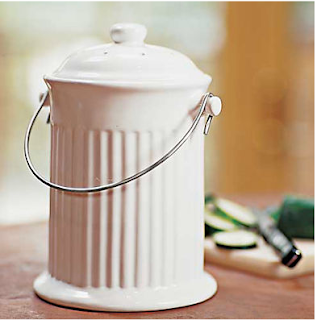 We fill it daily and then go drop it on our "slow compost" heap in the backyard. (It's a drizzly day - and again, it's GARBAGE - so no photos of that, either.)

Recycle goes out weekly. Our goal? Less than one bag of trash a week. With an infant coming. And months of house-guests queued up for Winter/Spring 2010.

I've got plenty of inspiration, though, and I've just subscribed to THIS BLOG - whose goal is to reduce the trash of the world to zero. I know that a zero-trash (as in Landfill trash) is impossible. It's the 21st century. But I also know that our output level can be drastically reduced.

Simple steps we've taken to reduce our trash (sometimes I feel like a broken record, but people ask and so I answer)

* Cut back on paper towel purchasing, and only purchase recycled paper towels at that. In the kitchen we use bar mops to clean the counter.
* ONLY cloth napkins. And cotton/linen at that. Blends don't absorb and if you come from a southern family like ours that loves it's fried chicken...you know that anything aside from a moist bath towel just won't cut it.
* Cloth Diapers and wipes (again - cotton. Organic when possible)
* Recycle everything possible
* Compost everything possible.

A note about that - we don't compost meat waste because it attracts critters and goes rancid before it breaks down. If we had the crazy welded contraption that a friend of the husband's has - then we would toss our meat in - both the enticing raw meat smell and the stomach-roiling rancid meat smell are contained and the enzymes and the heat and blah blah blah. But we don't. We're Luddites. We have a big pit in the backyard that we throw all of that shit into. (Not literally - NO HUMAN OR ANIMAL WASTE IN COMPOST THAT GOES ON FOOD BEARING PLANTS)


So there you go. Step one. Reduce.

Step two - re-organize. Or something.

PS - there is differing opinion on whether or not you should compost wood ash (from your fireplace) and the decision we've come to is that it will be spread over the grassy lawn part of the property and on specific plants. Because of the pH levels and the chemicals present as it breaks down, it's good for hardier plants but not for delicate plants (like the blueberry bush I feel the need to have.) Which is why we collect it, but it doesn't appear on the list. It's a special item.
Posted by Emily at 10:08

Email ThisBlogThis!Share to TwitterShare to FacebookShare to Pinterest
Labels: eco-friendliness, intentions, outside, project