These are the People in my Neighborhood...

When we left our fair city for Silicon Valley, we decided two things:

1) There was absolutely no reason for us to pick a spot that made Steve's commute too long. (And good thing, too, since his car was crushed like a grape in transit and he cycles in 3 days a week, now. Don't be sad for him. He'd cycle in five if he could and then do a full century - 100 miles - on the weekend.)

2) Since we were leaving the state altogether, why not try something completely different?

We picked Willow Glen. Small townish without being too far removed, suburban but not contrived, and quirky.

For the record - none of those things are hard to find here. Seriously, through a dart at a map of the small towns that got swallowed up by San Jose and you will find lovely communities with gingerbread homes and historical markers aplenty.

As for the quirky -- we've been noticing Halloween decorations going up around town lately so last night we decided to walk around our little neighborhood and get some pictures*. 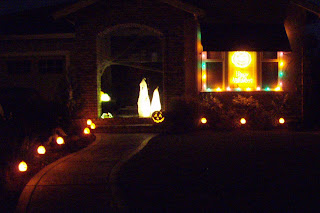 The lights that line the walk are pumpkin shaped. 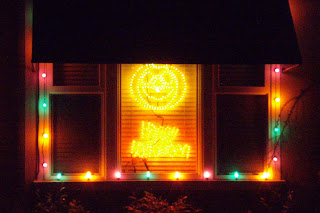 A close-up of the window. It says "Happy Halloween." 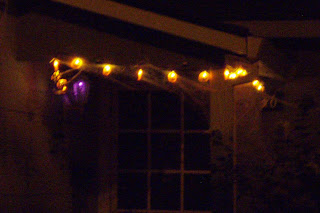 This porch has the string lights and cobwebs...simple but festive. 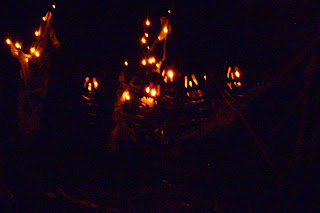 I'm going to have to get a picture of this in the daytime - it was just too dark. This (very nice) gentleman has arranged Skeletons to be crawling out of their graves on his lawn. He also has a LOT of cobwebbing and apparently on the night of the big ToT, he puts out a smoke machine. 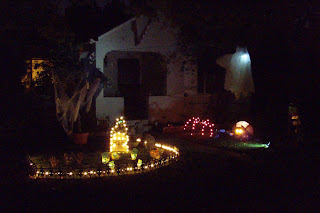 These guys weren't waiting for Halloween to pull out the stops...or if they are - Halloween is going to be *awesome* at their house. On the right is a giant moving spider that is both self-illuminated AND strobe-lighted. 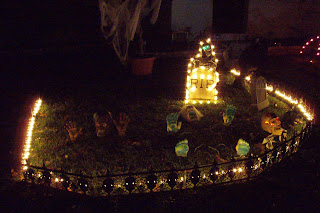 A close-up of their graveyard. The skull on the right blows smoke. 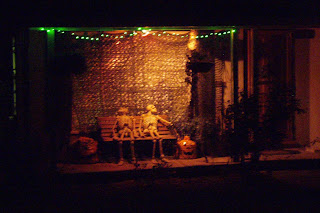 This is across the street and two houses down from us. It makes me giddy.

I'm going to plan BIG for Christmas and next Halloween. Apparently in our 'hood a plain-ol' Jack-O-Lantern just won't cut. I'm actually REALLY good with that!

*taken with my slowly becoming obsolete phd olympus. I <3 that camera, but it's not so great for night shots. It's best for high-noon pool party shots.

Email ThisBlogThis!Share to TwitterShare to FacebookShare to Pinterest
Labels: Halloween, outside, Willow Glen